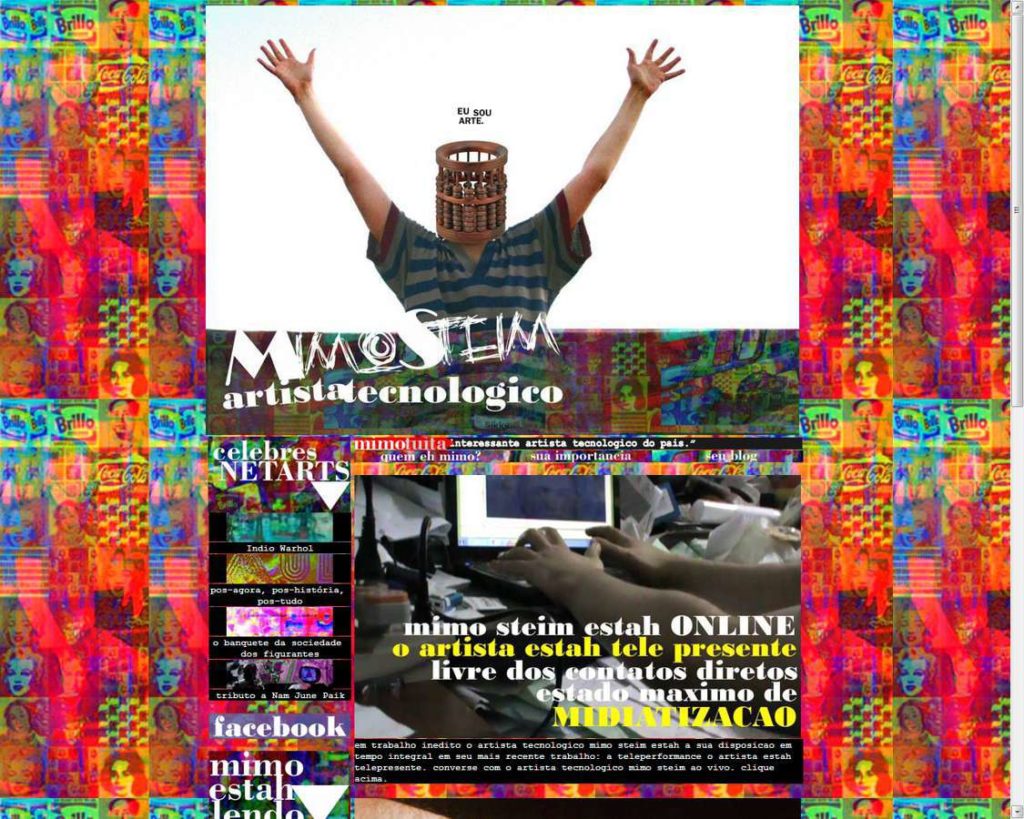 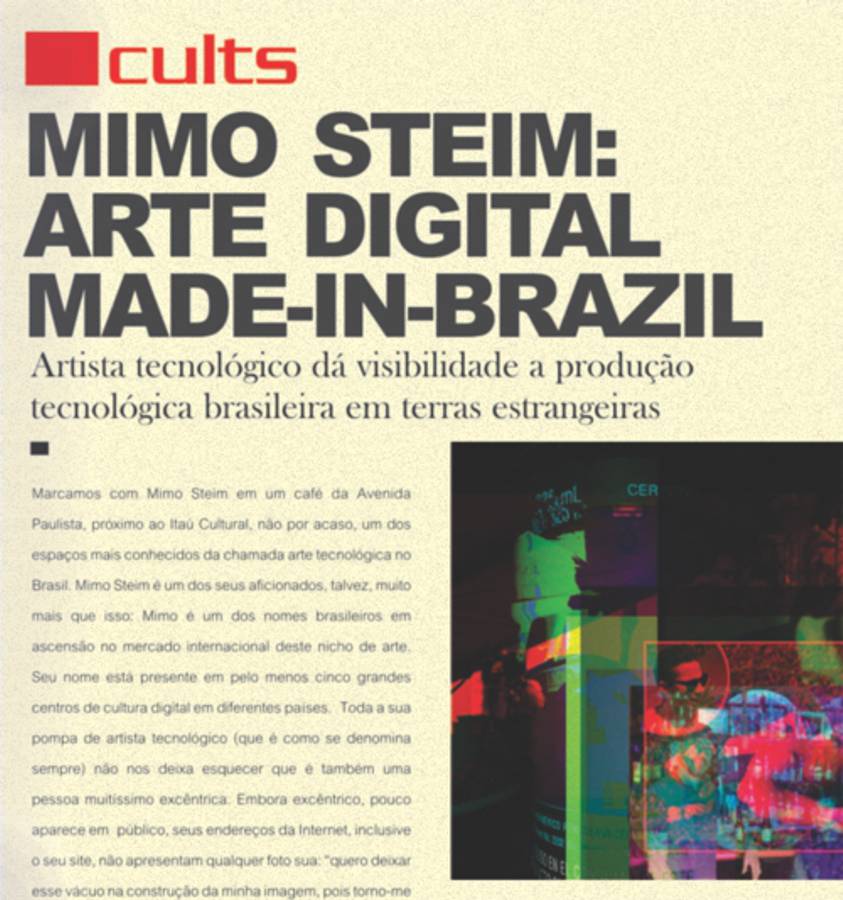 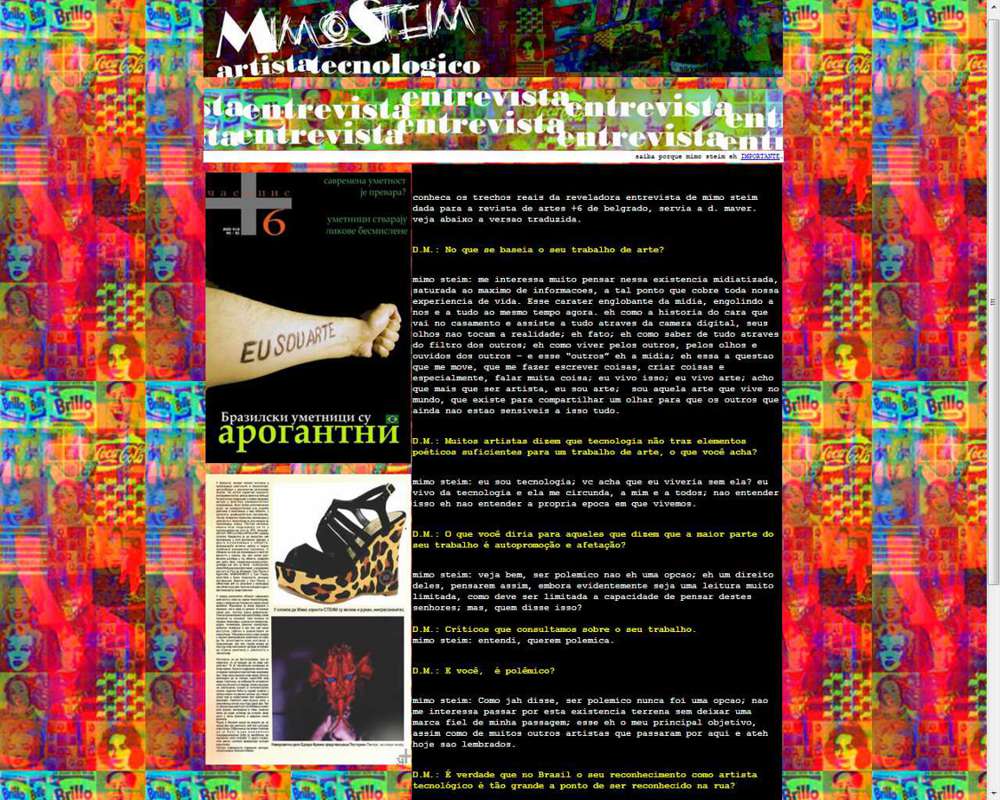 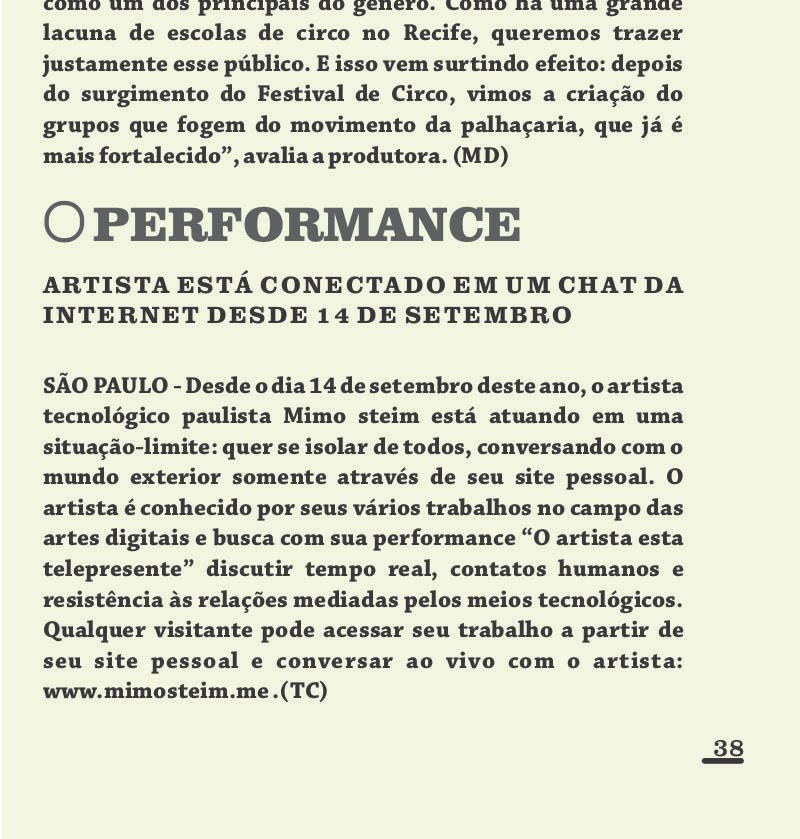 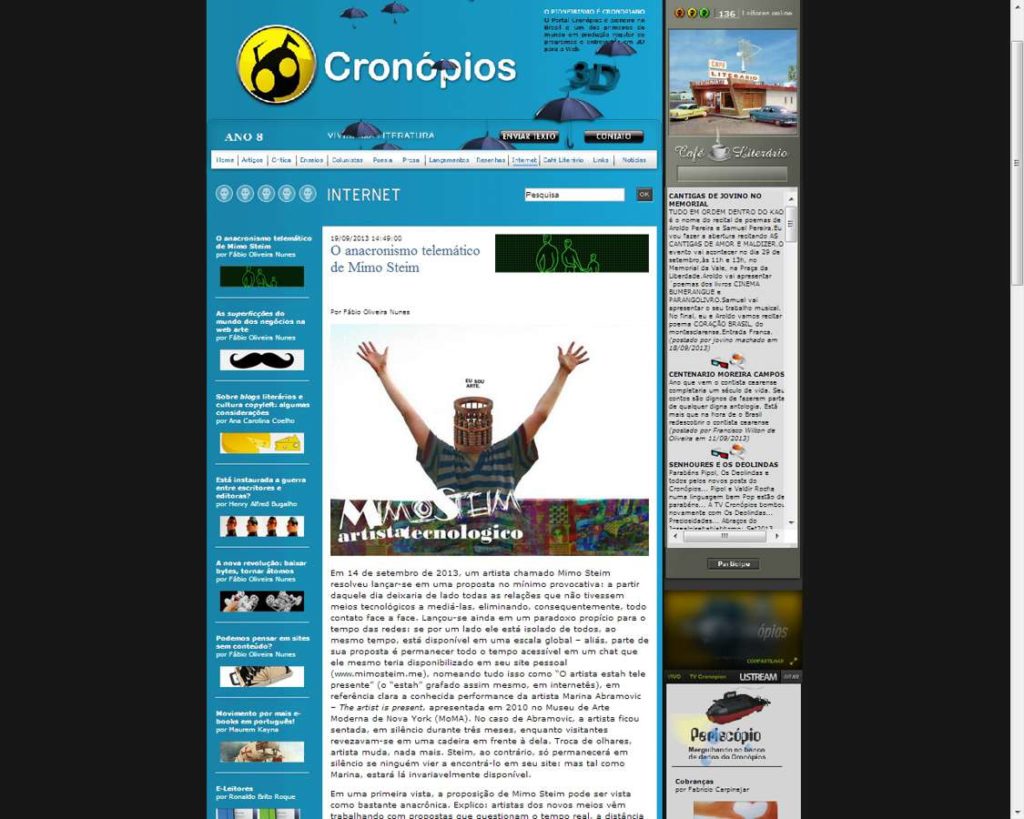 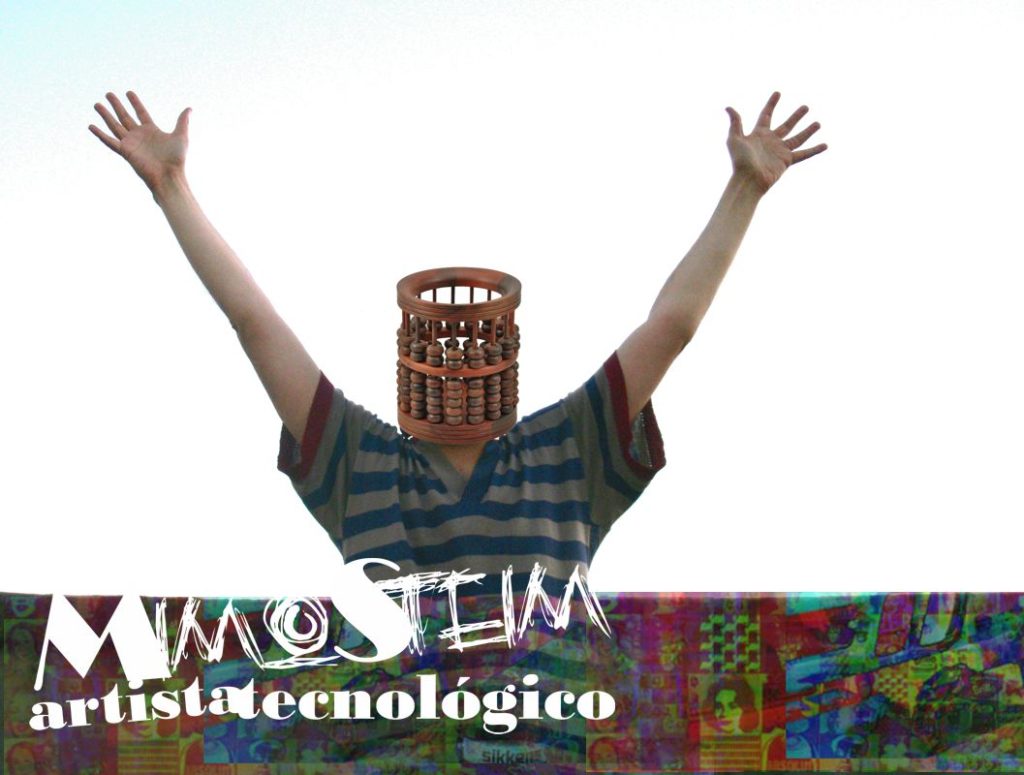 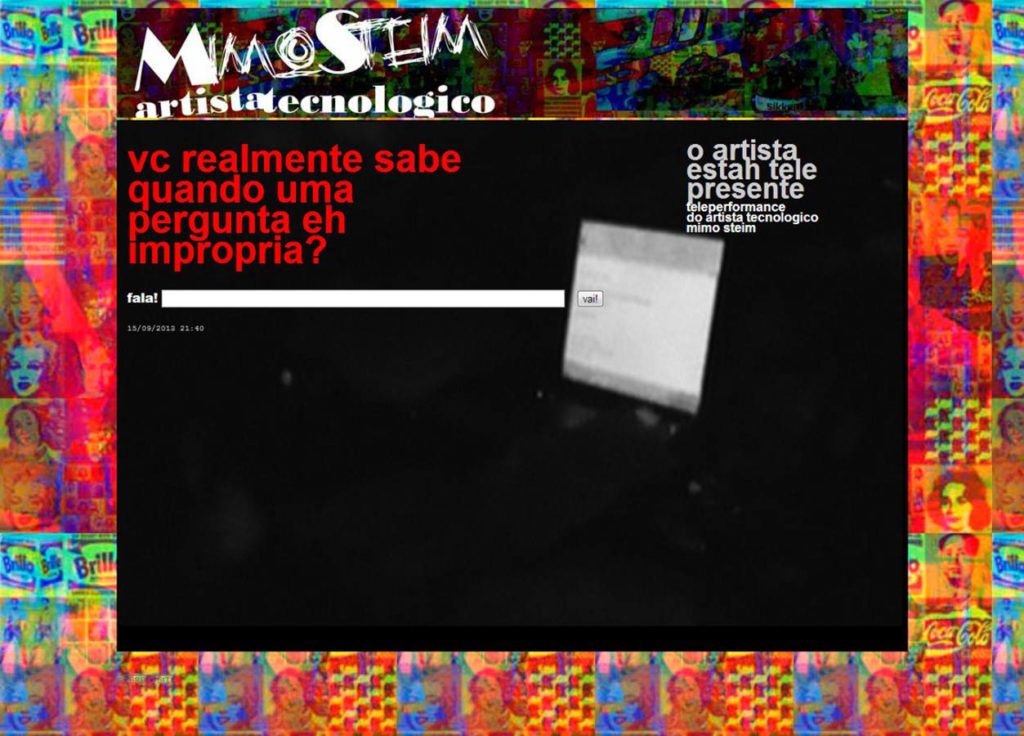 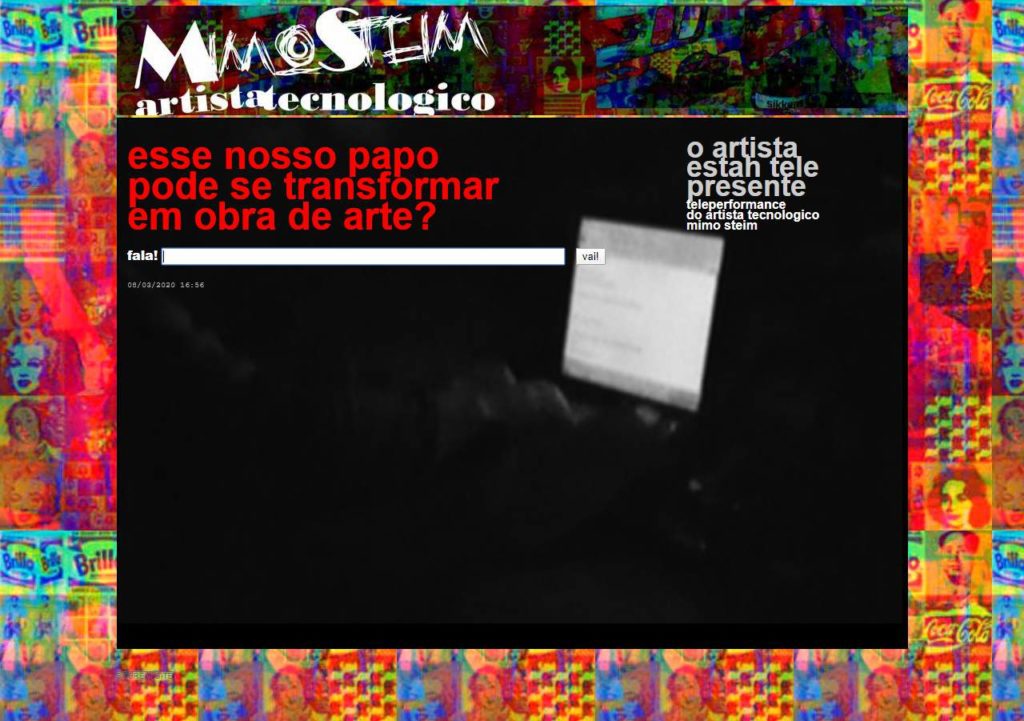 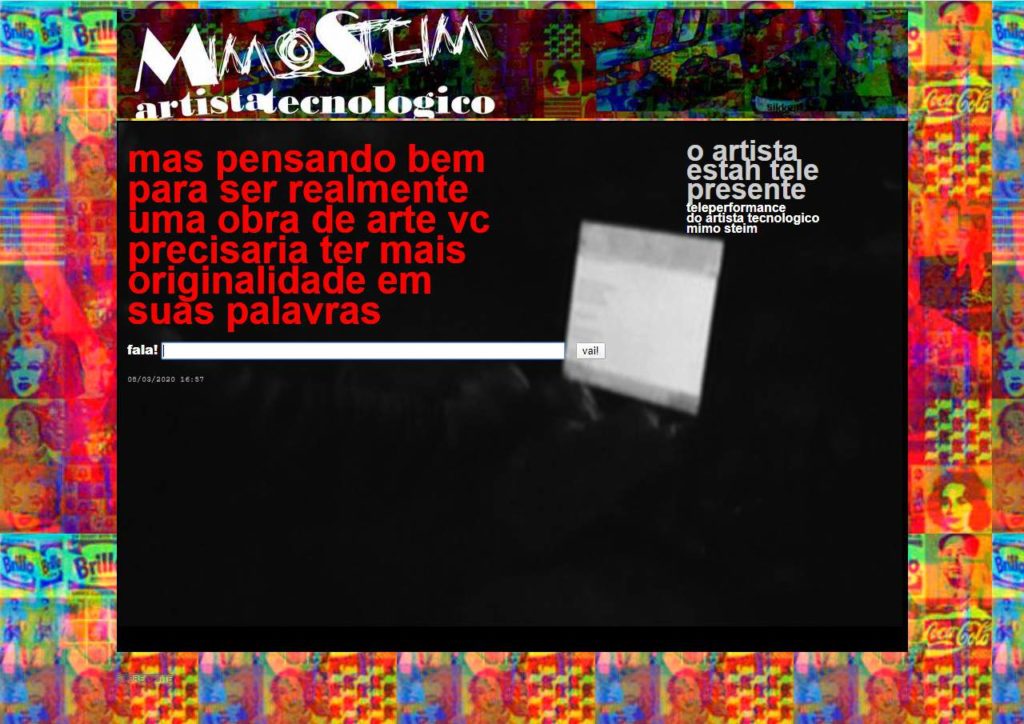 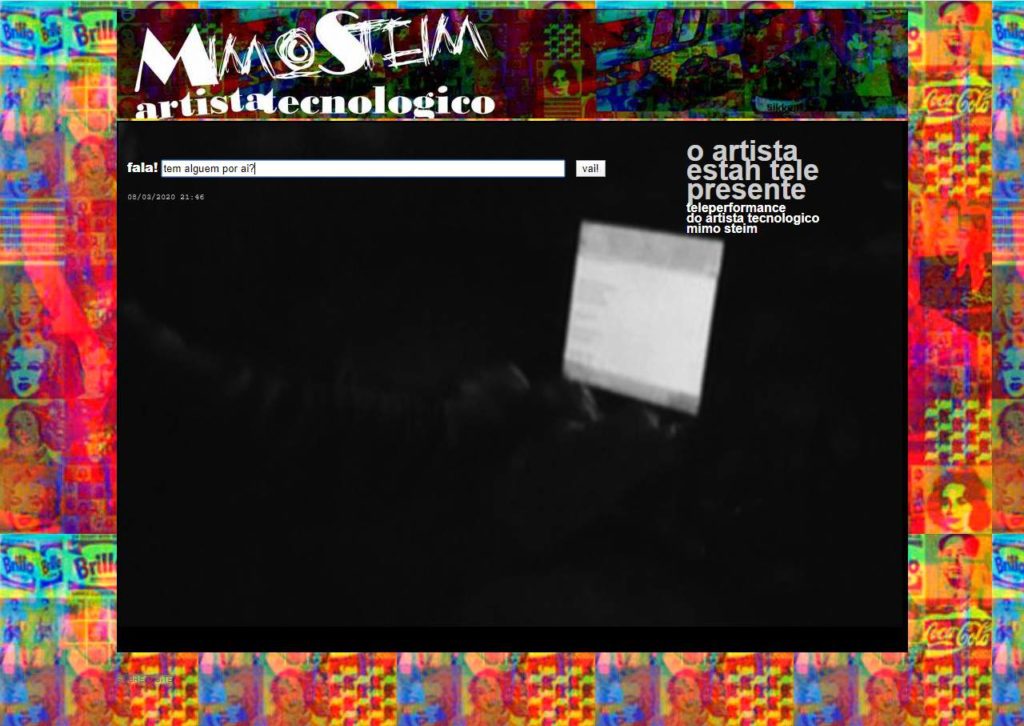 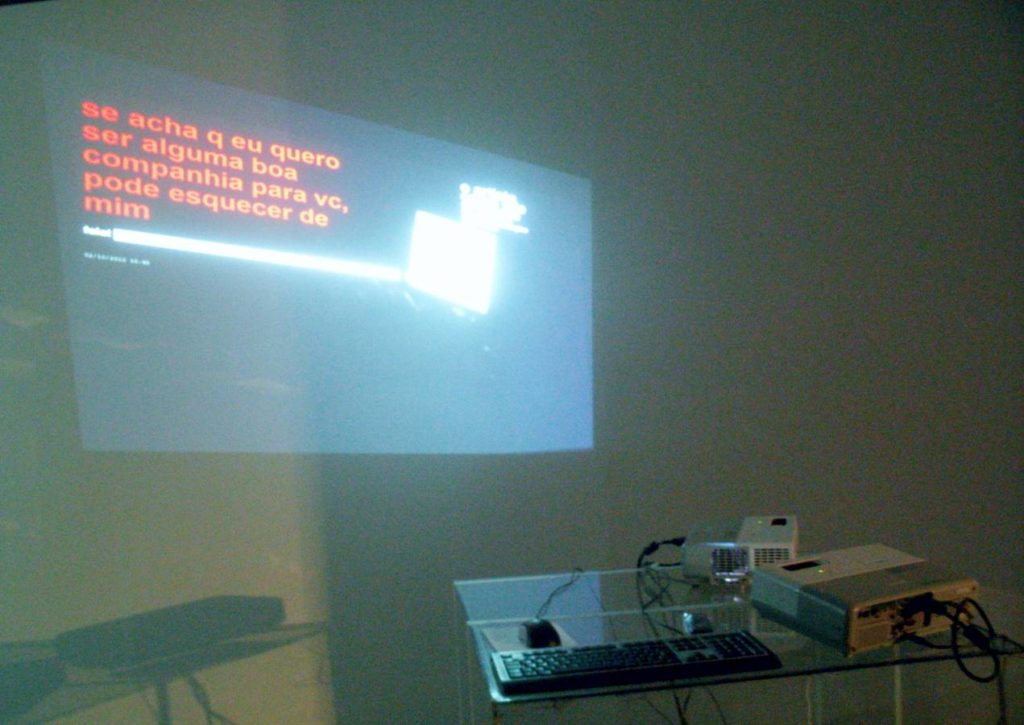 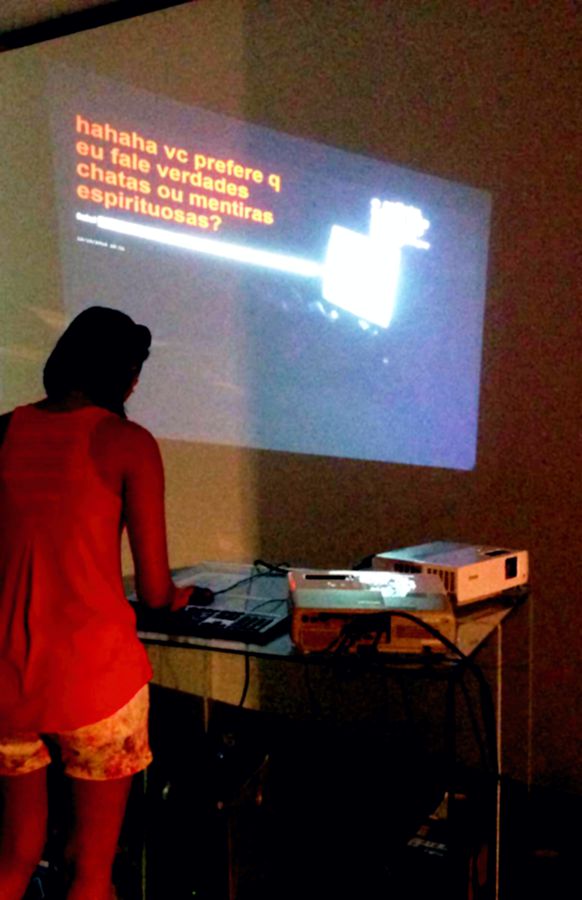 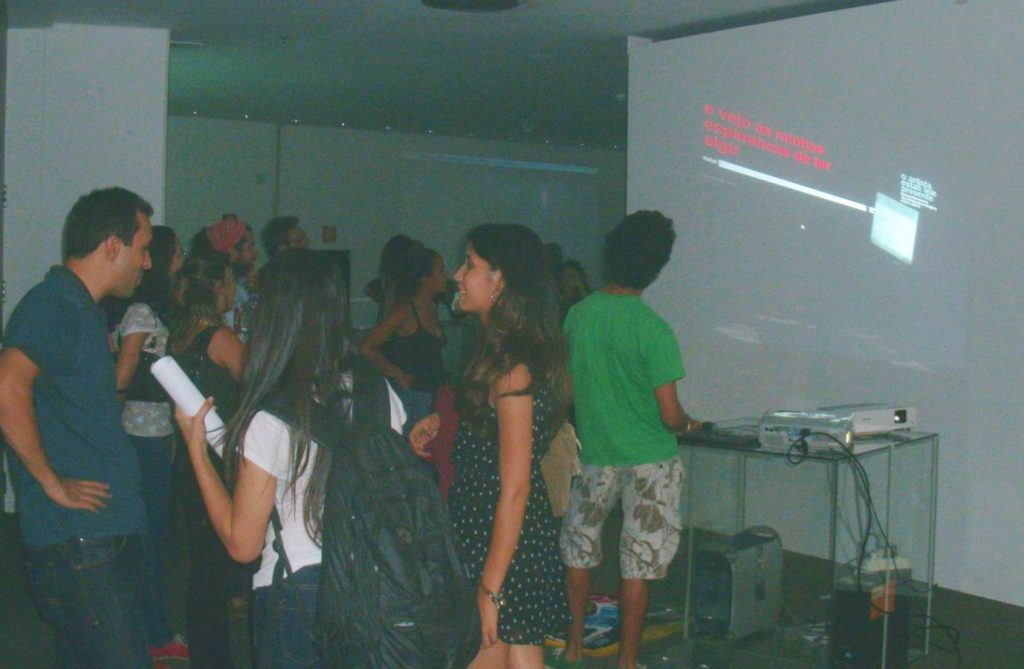 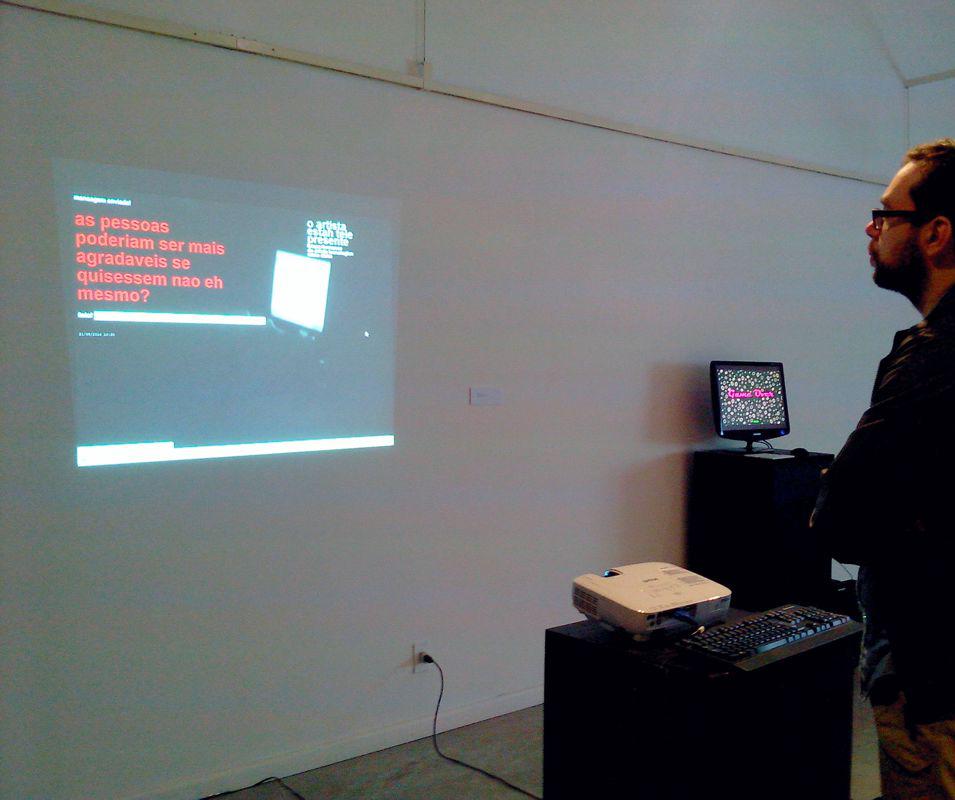 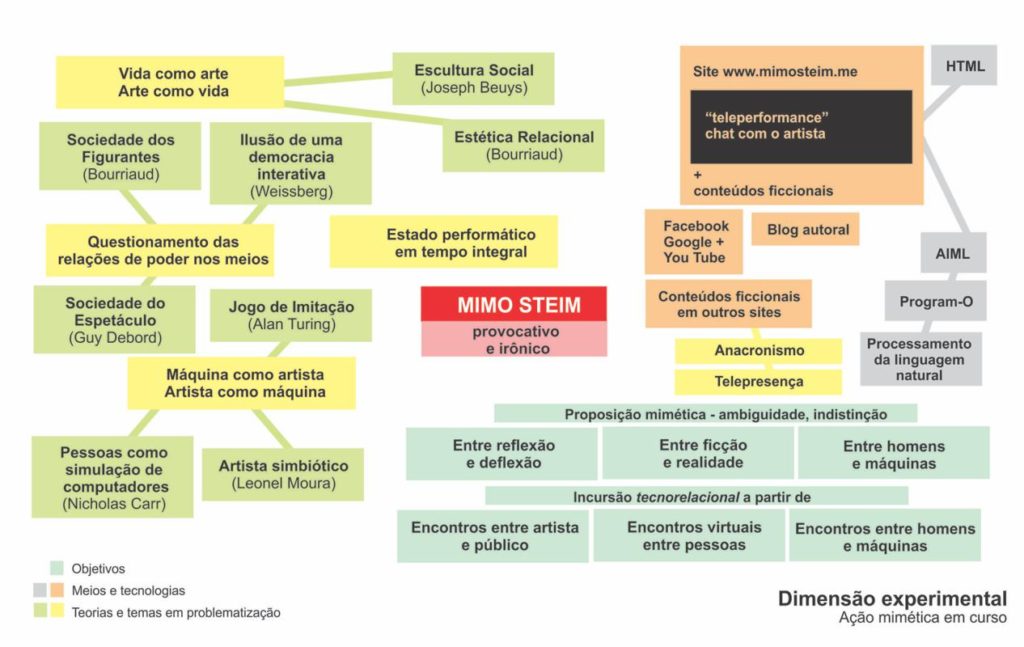 Theoretical-practical structure of the action (Portuguese only).

Mimo Steim introduces himself as a young technological artist. The artist would have produced some interactive installations and artwork on the Internet – web art . There is a mixture of naivety and excessive pretension in the texts in which it is presented; he proclaims himself as one of ‘the most important Brazilian technological artists’, which certainly would not be ratified by any specialist. His works have strange titles, as if the title itself were capable of emanating the entire poetic charge of a work. His experiments in web art resemble the first incursions in the genre, proposing compositions of overlapping images, mapped by links; assemblages with little aesthetic rigor. He seeks to write texts that denote a different condition of his position as an artist, as if this finding provided him with some kind of social status. In one of his recurring phrases he seeks to summarize his own existence in an aesthetic condition: “I am art”.

At a certain moment, Mimo decides to distance himself from “direct” personal interaction by proposing a “teleperformance” in which he would remain uninterruptedly online talking (in Portuguese only) with interlocutors through a chat room present on his personal website, called The artist is telepresent (2013). The reference is clear to Marina Abramovic’s well-known work, The artist is present, in which the artist remains for two months at the Museum of Modern Art in New York, in 2012, keeping herself in front of her visitors. In turn, Mimo Steim adds the idea of ​​telepresence, a term familiar to the 90s of the 20th century, which was widely used to designate actions and transmissions of images from a distance, with the key factor of real time, inducing us to dialogical propositions that supplant the physical distance between the points involved.

But, contrary to what is intuited when thinking about works in technological means, Mimo relativizes the protagonism of those who contact him in real time: his performance in the chat is (as a rule) ironic, situating the one who is in dialogue as an “ extra ”- inspired by the idea of“ Extras Society ”by Nicolas Bourriaud mentioned in Relational Aesthetics, which discusses the establishment of the illusion of being the real masters of a society that would worship our participation.

he tactics around Mimo Steim will be extended to his exhibition in 2013, at the Exhibition Em Meio # 5.0: Poetic Prospect at the National Museum of the Cultural Complex of the Republic, in Brasilia, and also at the first edition of the Festival of Art, Science and Technology of Rio Grande do Sul (FACTORS), between August 20 and 22, 2014, in the city of Santa Maria, RS. In the aforementioned exhibitions, an installation was presented that consisted of the projection of Mimo Steim’s “teleperformance” and the possibility of dialoguing with the artist through a keyboard. In the exhibition held in Brasília, the summary posted next to the projection area, sent by the author, was limited to describing the apparently given circumstance:

Acting via the web in a kind of “teleperformance”, in which he would condition all his human relations to new media, the technological artist Mimo Steim is always available to talk to any interlocutor, in real time. The artist opts for an ironic and interrogating behavior, sometimes trying to deconstruct his interlocutor, sometimes questioning its relevance. To communicate with Mimo, just chat in your chat.

The action ends up being based on the presumption of a full-time “performance” state – the artist’s ability to remain permanently “on the scene”, which seeks to elevate any conversation – however unpretentious it may be, in a potential aesthetic event . Thus, the relations established by Mimo Steim via network chat are guided by his provocative character: he tries to lead his interlocutor, sometimes by incessant and intricate questions, sometimes by relativizing the importance of the visitor in the face of his supposed genius, and emphatically distancing himself from any assumption that he is a robot. In some moments, he presents himself as “an artist who pretends to be a robot” to justify his strange behavior or some repeated responses, but always distancing himself from objectivity, docility and even submission to what we usually experience in the relationship between humans and machines.

Was he a robot-artist or an artist-robot? How much of our subjectivity is contaminated by the predictability and systematization of machines or how much of what we have is more subjective is reflected in machines that are increasingly humanized? In this case, specifically, it should be revealed that every conversation with Mimo Steim is automatic. Mimo is, in fact, a conversation robot – a chatbot – based on Artificial Intelligence Markup Language (AIML) capable of simulating a conversation like those established between human beings. It was developed as part of the postdoctoral research by Fabio FON (Fábio Oliveira Nunes) under the title “Mimicry: Relational strategy in art and technology” as supported by FAPESP (São Paulo Research Foundation).

After two years of dialogues and improvements in his knowledge base, Mimo Steim now has more than 45,000 terms (and conjugation of terms) associated with responses, distributed in more than 220,000 lines of code – which, despite the rudimentary nature of this technology compared to other applications in artificial intelligence, it provides a reasonable conversation experience, taking into account that the robot has many purposefully ambiguous responses.